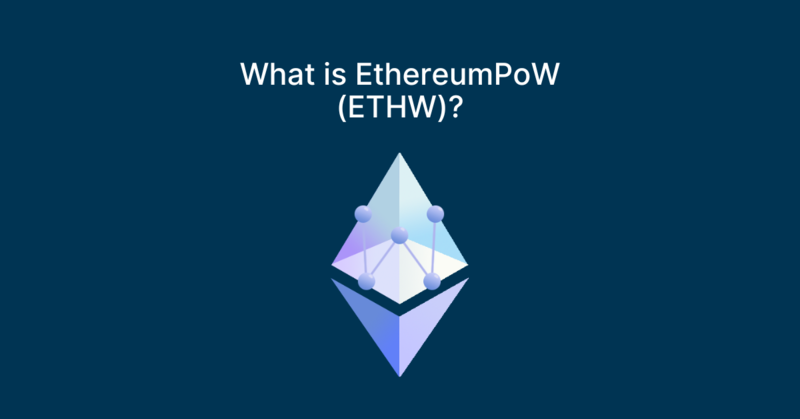 Since its launch on July 30, 2015, Ethereum has been using a Proof-of-Work (PoW) consensus mechanism to secure its network. A PoW mechanism involves solving complex math puzzles to create new blockchain blocks. The process allows Ethereum nodes (distributed computers) to reach a consensus on transaction requests and prohibit manipulations. However, Ethereum shifted from PoW to Proof-of-Stake (PoS) mechanism on September 15, 2022.

EthereumPoW (ETHW), a Proof-of-Work (PoW) fork of Ethereum, is a community-based project of sovereign developers and miners led by crypto industry veteran Chandler Guo. Guo presented the ETHW idea on Twitter on July 27, 2022. Since then, the topic has drawn much attention, particularly from miners against The Merge. Even Tron founder and Poloniex investor, Justin Sun, campaigned for the project to support the PoW mechanism on Ethereum and offered to donate some forked ETHW to build out the ecosystem.

However, after the Merge, Poloniex ended up supporting another fork called EthereumFair (ETHF).

The ETHW core contributors posted a Twitter thread with a roadmap of the mainnet activation of the ETHW mechanisms. According to the plan, the mainnet will go live a few hours after The Merge (the shift from PoW to PoS). Besides, the mainnet will be activated on the 2,049th block epoch after the change. This is why the ETHW block height will forever be that of The Merge +2,048. Initially, it will have an average mining difficulty of about 220 transactions, while the hash rate will be more than 15 transactions per second (TPS).

These are the ETHW mainnet information:

Why Did the EthereumPoW Hard Fork Take Place?

Before we jump into the reason why EthereumPoW hard fork took place, let’s learn the meaning of a hard fork. A hard fork is a blockchain software upgrade that demands all network validators comply with the latest version of the network’s software. While Ethereum has experienced multiple hard forks before, the most significant hard fork happened in 2016 when Ethereum split into Ethereum (ETH) and Ethereum Classic (ETC).

EthereumPoW hard fork occurred because some miners didn’t want to give up on the lucrative PoW mechanism for the less-lucrative PoS. According to the latest report from Arcane Research, Ethereum mining earnings hit $18 billion in 2021, slightly above Bitcoin’s $17 billion returns. Even in the better part of 2022, Ethereum miners have been topping the earning charts. Below is a graph comparing the mining rewards of the two most significant digital currencies by market cap for the past two years. 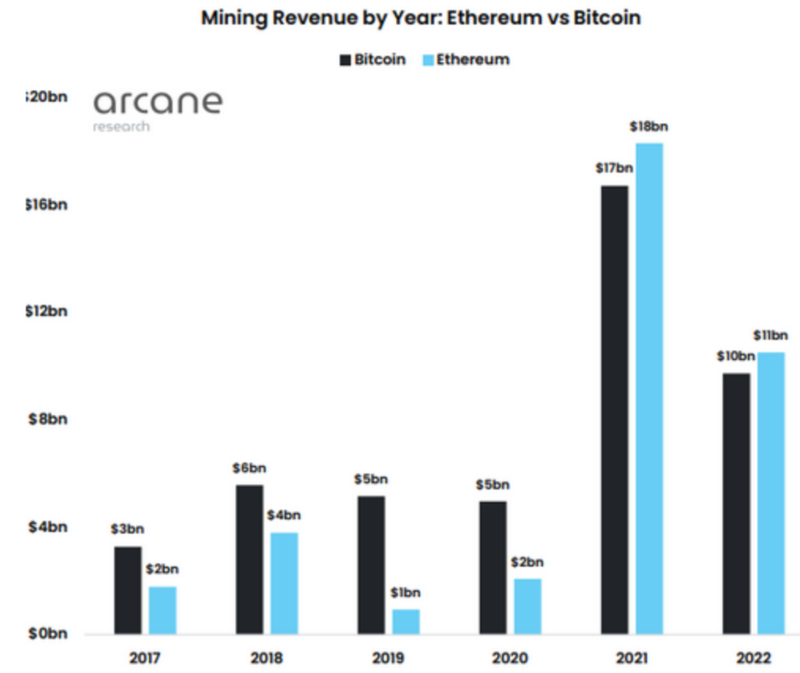 As shown, Bitcoin mining revenues were higher than Ethereum’s until 2021. With the revenues hitting billions, Ethereum miners invested heavily in high-end mining equipment to boost their earnings. However, these earnings have instantly become extinct as Ethereum has shifted from PoW to PoS. This is why some miners vowed to continue with a PoW mechanism on the Ethereum network.

In a PoW network, miners are responsible for confirming transactions and competing with each other to solve mathematical puzzles. On the other hand, a PoS network eliminates miners from the equation. Instead, investors stake their tokens to secure the network and don’t need mining equipment. An algorithm randomly picks stakers to determine the next block, and those with larger stakes have higher chances of being chosen. The major benefit of a PoS network is that it’s energy-efficient compared to a PoW blockchain.

A blockchain fork entails copying all the existing features, wallet balances, assets, and smart contracts. This implies that all the assets running on Ethereum will now run on the EthereumPoW mainnet. However, this isn’t sensible without the backing of the community. When a network splits, the users determine the “real” chain by looking for value. For EthereumPoW to succeed, it requires widespread support from daily crypto users, developers, and businesses – not just miners. Without these three categories of people, ETHW will become useless, like a discounted photocopy of the Mona Lisa.

However, this is unlikely to occur, primarily because of Ethereum’s extensive ecosystem. Ethereum’s ecosystem comprises thousands of independent assets, DeFi marketplaces, NFTs, and stablecoins.

Adding stablecoins to ETHW is more complicated, as stablecoins are backed by real-world assets, like dollars in a bank account. This means it’s almost impossible to fork such assets without depositing collateral in a financial institution unless you are the U.S. Federal Reserve.

For instance, the biggest stablecoin by market cap, Tether (USDT), has considered the above issues. Its CTO Paulo Ardoino said the company would only be backing post-Merge Ethereum. USDT accounts for billions of dollars on Ethereum. EthereumPoW will face some challenges without the support of Tether. Ardoino stated that DeFi complications guided their decision.

It’s not about what I/we prefer between PoW/PoS.
Stablecoins should act responsibly and avoid disruption for users. Especially for DeFi it’s really delicate.

Aave, the biggest DeFi lending protocol on Ethereum, has also had its say, with Integration Lead Marc Zeller emphasizing Ardoino’s point. “You cannot have a fiat-backed stablecoin doubling the supply overnight and keeping $1 value.” He further explained that stablecoins can limit any fork from succeeding and that the best way out is issuing new stablecoins – which again downplays the essence of a fork in the first place.

For a quick overview of the different Ethereum forks and blockchains, you can check out the Eth Wars page on Gecko Terminal, which sums up the different coins’ prices, 24-hour price change, dominance and how it compares against the ETH market capitalization. 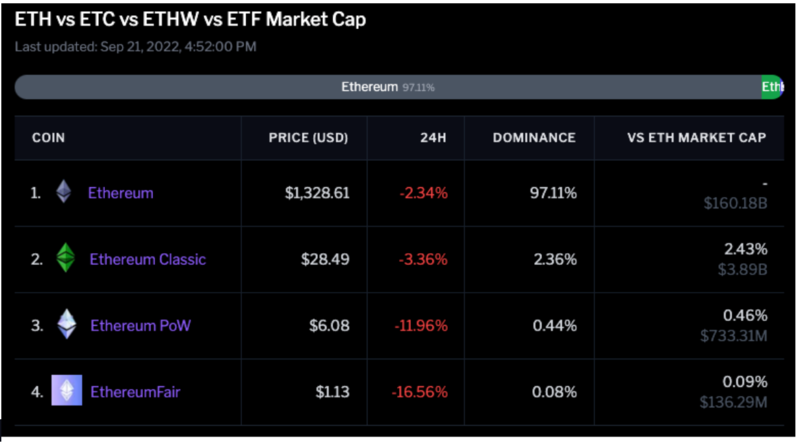 On September 16th, EthereumPoW suffered a replay exploit that led to 200 ETH being siphoned by the hacker. Blockchain security firm BlockSec revealed the incident two days later, stating that the attack occurred via the Omni Bridge on the Gnosis chain.

A replay exploit is a network attack where hackers adjourn or dishonestly replay a transaction message on another network to execute a single transaction twice or more. For the ETHW call replay exploit, the attackers first transferred 200 wrapped Ethereum (wETH) through the Gnosis chain Omni Bridge and later replayed the transaction on the EthereumPoW blockchain to receive an extra 200 wETH. The attack exhausted the balance of the contract running on the network.

While acknowledging the attack, the ETHW team published raw data illustrating the two transactions were totally different, hence, denying a transaction replay on the network. Instead, it clarified that the attack was a cell data replay due to vulnerabilities in the Omni Bridge contract.

ETHW is the native token for the EthereumPoW network, while ETH is the native currency for Ethereum. Here is how these two tokens compare:

After the transition to the PoS mechanism, the Ethereum network randomly picks an ETH validator and bestows them the responsibility of determining the next block. To be an individual validator, you must stake a minimum of 32 ETH. If you have less than 32 ETH and want to participate in ETH staking, you can join a staking pool. To protect the network from scams and frauds, validators caught verifying fraudulent transactions are fined – this process is known as slashing.

Besides being sustainable, PoS consensus helps Ethereum become more decentralized than EthereumPoW. Besides, validators don’t have to purchase expensive mining equipment anymore. Even if they don’t hold 32 ETH to join as an individual validator, ETH holders can stake their tokens through a mining pool to secure the network, and more participation leads to more decentralization.

Another significant upcoming update that differentiates ETH from EthereumPoW is sharding. Sharding is a programming process where data is distributed to multiple computers to boost processing speed. Ethereum will be leveraging sharding by introducing 64 shards. Each shard is like a new chain linked to the previous Ethereum network to integrate with the previously recorded transactions. Ethereum and EthereumPoW work similarly, only that ETH distributes the workload into several databases.

Sharding will directly solve Ethereum’s scalability issues. Unlike EthereumPoW, which only processes 15 TPS, ETH will become more efficient, processing almost 100,000 TPS. You can think of EthereumPoW as a busy street with a single lane, and ETH has a busy road with multiple lanes. The expansion makes traffic flow seamlessly and increases the speed with which vehicles move.

We have discussed how Ethereum has introduced 64 shards and how validators are chosen to verify blocks. However, something should connect the shards and determine the validator. This takes us to the final significant difference between ETHW and ETH. The 64 shards are integrated into a single blockchain that controls them and facilitates transactions. As such, the blockchain acts as the brain of the whole ecosystem and is known as Beacon Chain.

The Beacon Chain was launched in 2020 to ensure the PoS mechanism was functional and sustainable before implementing it officially. As such, it operated alongside the original PoW chain. But after The Merge, it started acting as the main chain for ETH.

Another role of the Beacon Chain is randomly selecting validators and monitoring their activities. The chain is also responsible for penalizing validators who attempt to validate illegitimate transactions. The randomness in choosing the validators is necessary to ensure the network is not partial towards some participants.

Despite sharing the same chain (Ethereum Mainnet), the value of ETHW and ETC differ significantly. At the time of writing, ETHW was trading at $13.41 and ETC at $34.43. Since ETC forked from ETH in 2016, it missed the decentralized finance (DeFi) and non-fungible token (NFT) developments. Comparatively, ETHW is a recent fork of ETH. With the growth in DeFi applications developed over the past four years, ETHW can potentially be more valuable than ETC should the whole community adequately support it.

The latest, buzziest Ethereum fork – EthereumPoW – was set to benefit from The Merge. Through incentives of airdrops and charisma, the EthereumPoW team convinced almost 20 former Ethereum mining pools to continue securing the network. While a post-Merge market could be suitable for a smart contract chain that uses a PoW consensus, some people feel ETHW is more of a cash grab. If EthereumPoW receives more community support, it will undoubtedly be more successful than Ethereum Classic.