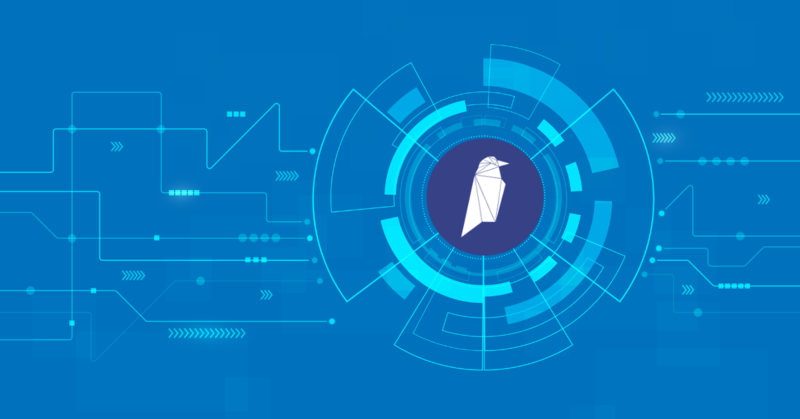 Folklores have a special place for Ravens – Messengers. Messengers of truth. HBO’s blockbuster series, Game of Thrones, featured Ravens in this exact fashion. For inhabitants of Game of Thrones’ world of ‘Westeros’, Ravens are the bearers of truth. Bruce Fenton, a board member at the Bitcoin Foundation, and blockchain developer, Tron Black, adopted this name (and concept) for their innovative blockchain project – Ravencoin.

Just like the George Martin-inspired series, Ravencoin would soon become a household name in the crypto space and a popular discussion topic amongst cryptocurrency enthusiasts.

Barely three months after its initial announcement, Ravencoin’s genesis block was mined on the 3rd of January 2018. Tron Black and his associate knowingly scheduled this to happen on the ninth (9th) anniversary of bitcoin’s launch.

Ravencoin is a fork of Bitcoin and presents a lot of advancements and adjustments to the original bitcoin code delivered by Satoshi Nakamoto in 2010. Just like Bitcoin, Ravencoin launched without any token pre-mined. Mining activity was open to everyone at launch. Ravencoin’s early developments were funded by Medici Ventures, a subsidiary of Overstock. The Ravencoin foundation was founded later on in 2020 and plays a central role in Ravencoin’s development.

Ravencoin was well received by the rest of the crypto space with hundreds of miners joining the network within the first three months of launch. By this time, Ravencoin had seen a surge in general interest and had already garnered a large community of miners and investors; it has become one of the most discussed projects in the crypto space.

A contributing factor to this is Ravencoin’s easy mining system and of course, the improved experience for users. Ravencoin’s numerous utilities also opened it up to interests from other sectors outside the blockchain space. The Ravencoin community grew in numbers and attracted interest from some of the biggest cryptocurrency institutions, including Binance.

Like its namesake, the Ravencoin blockchain is being developed to be a bearer of sincere and incorruptible information. To achieve this, it is focused on improving Bitcoin’s code in areas related to decentralization and security.

Like bitcoin, Ravencoin runs the Proof-of-Work (PoW) consensus algorithm. Miners on the Ravencoin network compete to solve complex mathematical problems and validate transaction blocks while doing so. Miners who solve the presented problems first are rewarded. Ravencoin uses the KAWPOW mining algorithm and is designed to suit the average consumer computer devices. By doing this, it encourages more miners to join and set up a more decentralized and secure network.

Ravencoin blockchain’s block time is one minute, which means that a new block is mined every minute. Essentially, this makes Ravencoin 10 times faster than bitcoin, which has a block time of 10 minutes. With a block size of 2MB, Ravencoin’s blockchain is more optimized to handle an ever-increasing demand.

One of Ravencoin’s main aims is to improve on the tokenized asset creation technology introduced by bitcoin. Asset creation technology allows companies and individuals to create a virtual representation of real-life assets such as gold and company shares on the blockchain. Ravencoin revolutionizes the asset creation concept by introducing the Full Asset Aware Protocol Level System. Unlike the Bitcoin blockchain where created assets can be accidentally destroyed, Ravencoin, thanks to the Full Asset Aware Protocol System provides adequate protection for assets created on its blockchain.

The protocol allows the asset creator and RPC commands to prevent assets from accidental destruction. It also allows these assets to be issued and managed by a single entity. Ravencoin’s decentralized and community-secure blockchain adds an extra layer of protection to these assets.

Ravencoins (RVN) bridged to Binance smart chain can also be used on DeFi platforms for yield farming, staking, and other activities as specified by platforms where they are accepted.

RVN has a maximum supply of 21 billion. None of these tokens were pre-mined or vested. The total supply will be distributed through mining activities. The current block reward is 2500 RVN, where miners will receive 2500 RVN for each block they mine.

Ravencoin’s mining system is unique and ‘inclusive’. Its inclusiveness stems from a mining technique that enables normal devices to participate in the mining program and secure the network. Ravencoin mining system is resistant to specialized mining equipment such as the ASIC (Application-specific Integrated circuit) miners used for mining bitcoin. It currently uses the KAWPOW mining algorithm which promotes a more decentralized mining system, compared to bitcoin’s SHA-256 mining algorithm.

Ravencoin’s ASIC-resistant mining algorithm is designed to prevent its network from being centralized. It runs a GPU-friendly mining system. This means that anyone can create a node and mine Ravencoin on their personal devices. Ravencoin’s mining facilities are being upgraded constantly to maintain this goal. The inclusive mining system promotes decentralization and widespread participation in securing the Ravencoin network. At the time of this writing, there are over 17,000 active miners on the Ravencoin network.

Ravencoin’s mining algorithm has been upgraded thrice, from X16R to X16RV2 and subsequently to KAWPOW currently in use.

The X16R was the first mining algorithm used for Ravencoin mining. X16R was specially designed for Ravencoin. It is a variant of the X11 designed for DASH. The X16R brings in a different approach to cryptocurrency mining. It runs 16 hash functions in series. Its hashing pattern was fashioned to be problematic to implement in ASIC devices.

X16Rv2 was introduced as an upgrade to X16R. In addition to the features of the X16R, X16Rv2 adds more features to further complicate Ravencoin mining for ASIC devices. It introduces newer hashing functions that ASICs haven’t been modified to mine upon into the Ravencoin network. Unfortunately, implementing ASIC resistance in a mining system is an unending struggle and a continuous process as ASICs have also been modified to breach the limitations of ASIC-resistant mining algorithms. Because of this, Ravencoin developers would soon implement a new mining algorithm known as the KAWPOW algorithm.

How to Set Up a Ravencoin Mine

Mining Ravencoin requires a few essential facilities; a Ravencoin wallet, a graphic with at least 4GB Ram, and the latest GPU drivers. You can install the official Ravencoin wallet or use your hardware wallets (Ledger Nano or Trezor; Trust wallet and Exodus wallet also run Ravencoin wallet services.

Having done these, follow this guide to set up a KAWPOW mine according to your device’s operating system.

The idea of block reward halving was introduced along with the original bitcoin code by Satoshi Nakamoto. Ravencoin implements this idea as well. Halving is a distribution management algorithm that reduces the reward (earned by miners for validating a block) by half of its former value.

Reward halving is designed to create scarcity by reducing the rate at which new tokens are generated. With the reduced supply rate, increased demand is expected to improve the token’s value more easily.

Ravencoin’s block reward is halved after every 2.1 million blocks are validated. At the current speed of one minute per block, the halving period is approximately 1459 days, 4 years, or after every 2,100,000 mined blocks. This time specification could vary depending on the block speed. The number of blocks mined is the most accurate parameter.

The first Ravencoin block reward halving occurred on January 11, 2022. Sequel to the halving, miners’ reward for each validated block was reduced to 2,500 RVN tokens from an initial 5,000 RVN tokens.

The next halving event is expected to happen at the block height of 4,200,00 or within the next 4 years (2022-2026). As per information from Ravencoin’s official website, the reward halving will continue to occur until the reward amount can no longer be halved.

What is Ravencoin Used For?

Ravencoin’s asset creation system is more advanced than that seen in itcoin. There are a lot of improvements to the asset distribution and management process and safety as well.

The token creator has some exclusive admin rights. They will be able to distribute rewards and message their token holders. The messaging feature comes in handy for creators who wish to communicate new developments to the holders. The reward distribution feature can be used by mainstream and cryptocurrency institutions to distribute dividends to their investors. Ravencoin blockchain’s tokens can be transferred and traded.

Ravencoin blockchain’s tokens can be used to tokenize things ranging from real estate to company shares or precious metals like gold or silver. Digital security firm, Chainstone in partnership with Medici ventures, Ravencoin’s early backer, had in 2018 issued over 12 million digital shares on Ravencoin blockchain.

The issued virtual shares work just like normal shares, but in addition, it is very flexible and protected by superior security technology. Ravencoin’s digital asset technology also equips companies with utilities to manage their shares and communicate better with their investors (shareholders).

Where to Buy Ravencoin

After a successful launch and the warm reception that followed, Ravencoin got off to an impressive start. With tons of investors and miners embracing the project, it was easily the hottest cryptocurrency project at the time. As of March 2018, Ravencoin was already trading on exchanges at above $0.02 and an average of over $200,000 worth of Ravencoins traded daily. With the news of listing on Binance – the world’s biggest cryptocurrency exchange in terms of daily volume – Ravencoin’s price jumped to over $0.05. 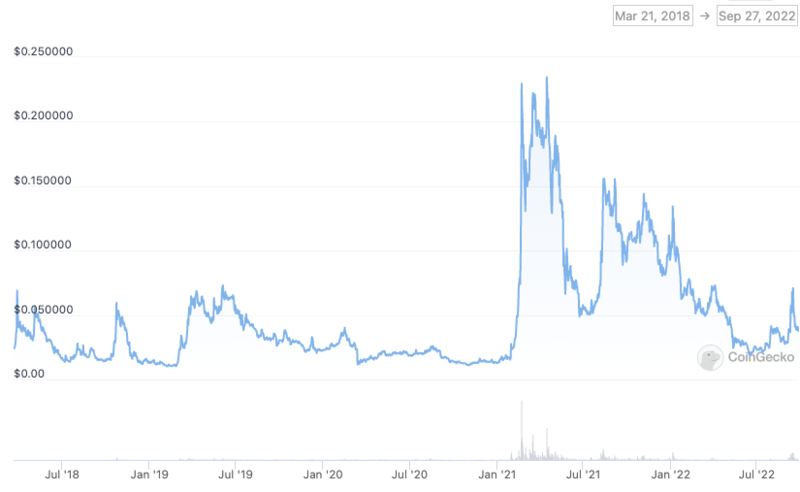 Thanks to the 2021 bull run and increased adoption, Ravencoin reached an all-time high of $0.28 in February 2021. This level couldn’t hold for long as the whole crypto market continued to experience gradual sell-offs. Ravencoin traded below $0.06 within a year of reaching its highest price level. As a result of the Ethereum merge and speculation of Ethereum miners moving to Ravencoin; it picked up pace in the market once again, posting double-digit gains while other cryptocurrencies including bitcoin crumbled in price. Ravencoin’s price has gone from just above $0.028 (on September 3, 2022) to over $0.07 in barely two weeks. We

Initial and recent developments around Ravencoin are properly channeled towards the original vision of the creators. Improvements to the mining algorithm are creating an avenue for even more miners to join the network, create stronger communities, and most importantly, secure the network. This steers the project towards being more decentralized, a feature held in high esteem by cryptocurrency communities.

Relative to many other POW blockchains, Ravencoin blockchain’s speed is plausible. The cheap transaction fees, enhanced speed, and strong fundamentals are a huge drive for adoption. As many blockchains shy away from the Proof of Work consensus algorithm, Ravencoin is positioned for an interesting time. The actual effect this will have on its development is not certain. Notwithstanding, the current dynamics are in favor of Ravencoin mining and it could see more organic growth in the near future.

Apart from an inclusive mining system, Ravencoin’s utilities have been key to its growth. Managed by a reputable team and supported by a vibrant community, Ravencoin is certainly one to look out for. That being said, do keep in mind that cryptocurrency investment is a risky venture, and investors are advised to do their own research.