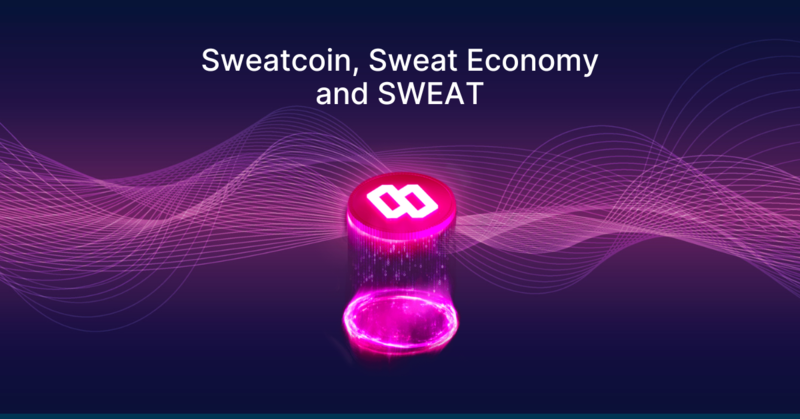 Sweatcoin is a fitness platform that leverages the Move-to-Earn (M2E) model by allowing users to convert their physical movements into digital currencies. As people move around, they generate SWEAT tokens, which they can donate to charities, buy products, or convert to other cryptocurrencies.

We’ll start with looking at Move-to-Earn before we go in depth into Sweatcoin, how it works, the Sweat Economy, SWEAT tokenomics and how to buy SWEAT.

Move-to-Earn aims to keep people physically active throughout the day, motivating them with the opportunity to earn incentives and rewards for moving around and doing exercises in the real world.

The crypto world has a fair share of innovative economic models supporting digital assets, but none beats M2E from a fitness perspective. By incentivizing users with cryptocurrencies and other rewards, multiple M2E apps have emerged to make fitness more attractive and rewarding.

M2E took off with STEPN, a fitness app that rewards users with crypto for exercising, which launched after COVID19 had lessened in most countries. Other web3 apps that leverage the M2E model apart from STEPN include GenoPets, Dustland, Step App, DOSE, and now Sweatcoin’s Sweat Economy.

The Sweatcoin platform was established in 2016 by Oleg Formenko and Anton Derlyatka. Initially, it was a platform that incentivized people to move. The founders were passionate about promoting physical fitness; hence, they created a system that motivates people to work out. Users who achieve a certain number of steps consistently receive tokens, which they can use to exchange for prizes.

The Sweatcoin founders had a deep interest in how the crypto world and physical health could come together. But during the platform launch, they felt their target users weren’t ready for a crypto-based payment reward system yet. After six years of developing their project, they expressed their intention to move into crypto rewards. Sweatcoin’s native currency, the SWEAT token, runs on the Ethereum and NEAR networks.

The Sweatcoin app boasts more than 63 million users, who have made a total of almost 20 trillion moves. When SWEAT was launched, the earlier users were allowed to swap their rewards for equivalent amounts of SWEAT tokens. The ability to exchange their rewards for a cryptocurrency with utility has resulted in the largest ever airdrop to active and opted-in wallets. Within 24 hours of integrating a crypto-based reward model on the Sweatcoin platform, it received over 150,000 users.

Since then, more and more people are opting in – currently, there are almost 300,000 users. Unlike in most cryptocurrencies, where users have to buy expensive equipment to mine coins or stake their holding to receive rewards, Sweatcoin users don’t have to purchase expensive mining equipment or stake their digital assets to earn SWEAT. Instead, they simply need to move around.

What is the Sweat Economy? 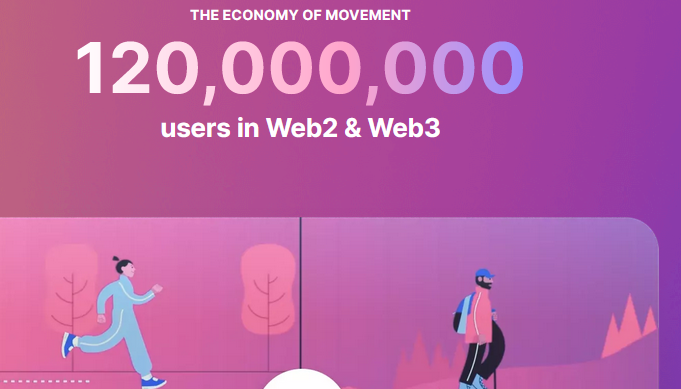 Sweat Economy is an on-chain crypto ecosystem and mobile app that facilitates the M2E reward model. In its simplest terms, it’s a web3 application of the existing web2 Sweatcoin app – which the team claims as 2022’s #1 downloaded health and fitness app in 58 countries.

Sweatcoin was established in 2015. The Sweatcoin team claims their product has experienced 120 million downloads worldwide  across web2 and web3. The platform wants to revolutionize fitness by exploiting the M2E reward model and making it freely available to all users. It has put in place multiple measures to regulate its token supply while remaining attractive to users, as seen in SWEAT’s supply schedule. 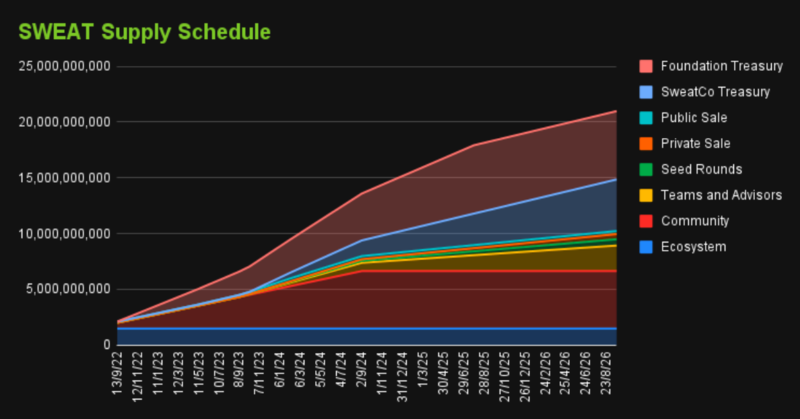 In the first quarter of 2022, the platform offered over $70 million in rewards to its users for staying fit.

How Does the Sweat Economy Work?

The Sweat Economy works in combination with the Sweatcoin mobile app. Users can generate rewards by participating in various fitness exercises, such as walking or running through the app. After accumulating rewards, you can spend them internally to purchase goods and services, exchange them for SWEAT tokens, or hold them in a web3 wallet. 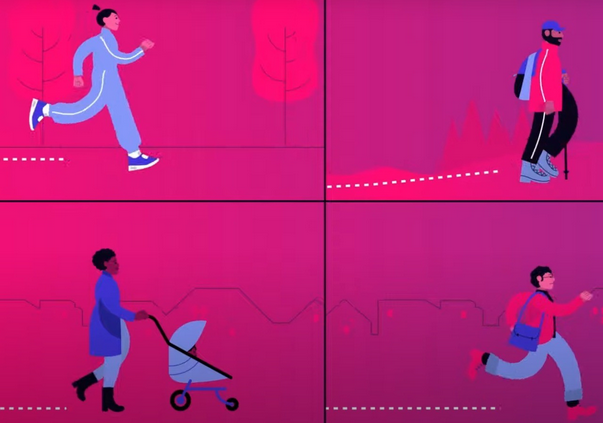 The Sweatcoin app utilizes several data collection systems, such as GPS and motion sensors, to detect users’ physical activities and reward them accordingly. Furthermore, the app uses motion validators to prove the legitimacy of user movement on the blockchain. The raw information sent by a user’s gadget goes through an algorithm to spot fraudulent activities before recording legitimate ones on the blockchain. Generally, after receiving tokens, users are free to decide what to do with them – be it playing games, unlocking perks, or swapping with other cryptocurrencies. Investors can also acquire SWEAT tokens from a crypto exchange.

SweatCo Ltd is the only validator of the Sweat Economy, but the Sweatcoin team plans to decentralize the process in the future. As such, intermediaries such as activity trackers, insurers, and healthcare providers will be able to run their nodes and receive a portion of the fees charged in the transactions they handle. 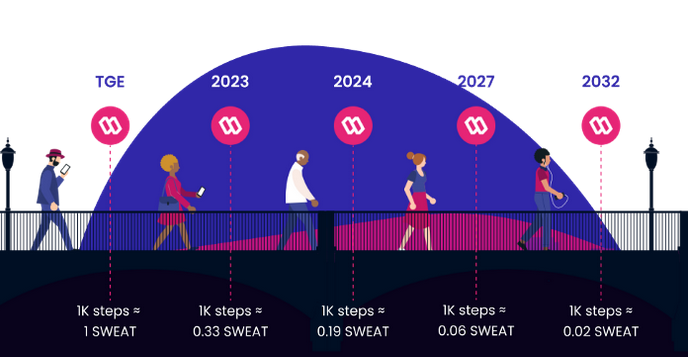 The platform has imposed a daily limit on the number of tokens a user earns, mitigating abuse and ensuring it’s sustainable throughout. The limit is currently 5 SWEAT tokens per day, but users can increase the limit by staking their tokens to earn staking rewards. SWEAT Economy runs on the NEAR protocol – a scalable, energy-efficient blockchain designed for DeFi applications. It’s the first M2E app built on NEAR.

Sweatcoin is not the first or only move-to-earn app. So, what differentiates it from the rest?

Each day, users can participate in Sweatcoin’s 2x Daily Boost challenge. The challenge lets users select the 20-minute intervals of the day when they are more active to make the most moves. During this period, users record double the number of moves. 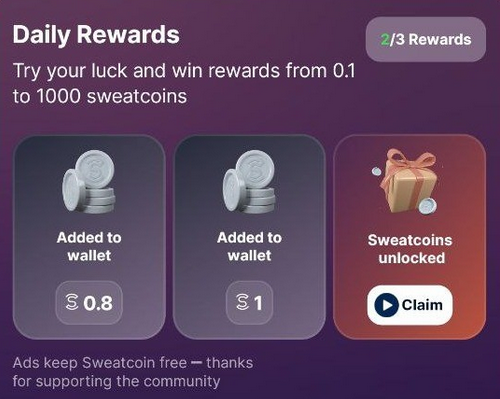 Sweatcoin has partnered with several brands to expand the utility of SWEAT:

Shop – Users pay SWEAT points in exchange for vouchers like PayPal, Netflix, Adidas, Amazon, etc. Besides, you can also redeem a trip abroad.

Bid – Users can use their rewards in random Sweatcoin item auctions.

Donations – Users can also donate their rewards to campaigns, like Sweatcoin for Good, that supports charities performing activities like restoring water wells in Africa and creating a sustainable future for water bodies.

The SWEAT token is the fuel behind the Sweat Economy – the reward token and the primary currency of exchange in the ecosystem. As the only reward token, it’s used to unlock rewards points, including vouchers and discounts for various brands, tickets to popular sports activities, and stablecoin prizes. Users can also stake their SWEAT tokens and raise their daily minting limit.

Besides, the Sweat Economy is developing an NFT-based game in the Sweat wallet. Users will be allowed to stake their tokens and compete with other users. Every head-on match will cause SWEAT burn and help minimize the token’s circulating supply. External NFT owners who want to advertise their products to the Sweatcoin community need SWEAT tokens to pay for service charges.

Sweatcoin is a Move-to-Earn platform with multiple practical use cases. Apart from motivating people to gain physical fitness, it fosters community development through charity programs. Since it runs on the cost-effective and carbon-neutral NEAR blockchain, Sweatcoin has excellent potential to bring the M2E economic model to the masses.