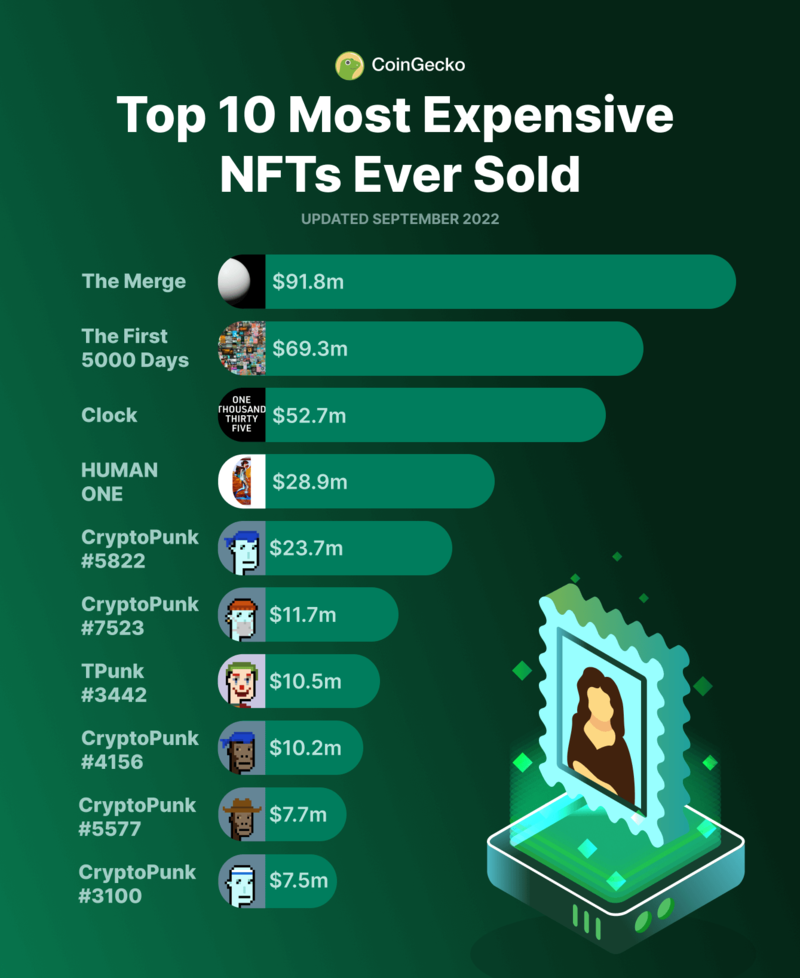 The blockchain industry has made significant strides since the first non-fungible token (NFT) was minted in 2014. Projects such as CryptoKitties, Bored Ape Yacht Club, and CryptoPunks have significantly contributed to the NFT ecosystem – creatively and financially. NFT sales have become the talk of the town, and some of the popular NFTs have raked in millions of dollars.

But how high can these figures go? Well, it is hard to give a precise answer because the ecosystem is constantly growing. As it evolves, revolutionary projects will be launched, and new milestones will be achieved. Although we cannot predict how high the numbers will go, we can take you through the 10 most expensive NFTs ever sold in history, based on its selling price in USD at the time of sale. But before that, let’s briefly see what gives NFTs value.

How Do NFTs Get Value?

Like any asset, the factors of supply and demand determine the value of an NFT. Typically, assessing an NFT’s value is much easier when it represents a real-world asset, like real estate or a physical piece of artwork. Nevertheless, most NFTs exist virtually – they are not backed by tangible assets.

NFT collections differ in supply, and the units may display different features. However, other aspects affect the value of NFTs. For instance, capped series NFTs with specific applications appear to have more value. The project developers, artists, influencers, and community impact an NFT’s demand.

Generally speaking, an NFT’s value is significantly determined by its creators, utility, marketers, and its community. Although there are several examples of successful NFT projects, there are also thousands that haven’t managed to launch or hit new levels successfully.

The Top 10 Most Expensive NFTs Ever Sold (Updated September 2022)

Now that we have a better understanding of how NFTs attain value, let’s dive into the highest selling NFT in history. It is important to note that the prices cited in this article are based on the time of the sale. 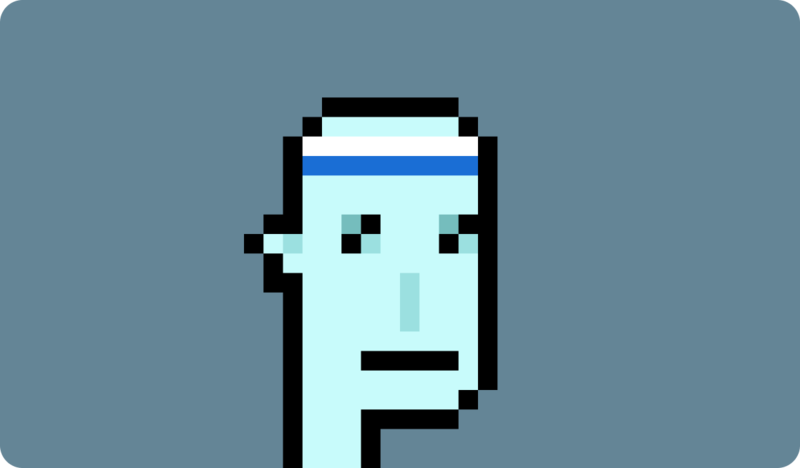 #3100 is one of nine ‘Alien’ CryptoPunks that exist in the entire CryptoPunks collection, and forms the collection’s rarest punk type. It also features special attributes like a white and blue headband, of which only 450 out of 10,000 punks have – explaining its high value. 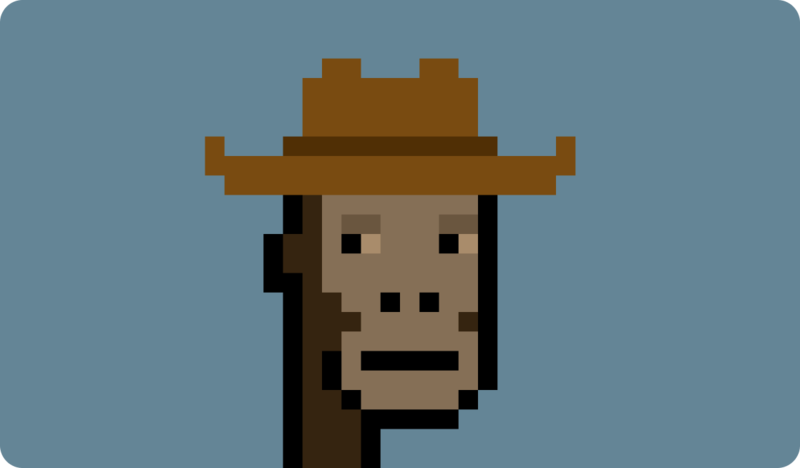 Ranked ninth, CryptoPunk #5577 is testament to the fact that the NFT frenzy did not end in 2021. In February 2022, this piece sold for $7.7 million. Notably, the work was bought with leverage. CryptoPunk #5577 features the ‘Cowboy Hat’ attribute, and it was purchased by the founder of Compound Finance, Robert Leshner. 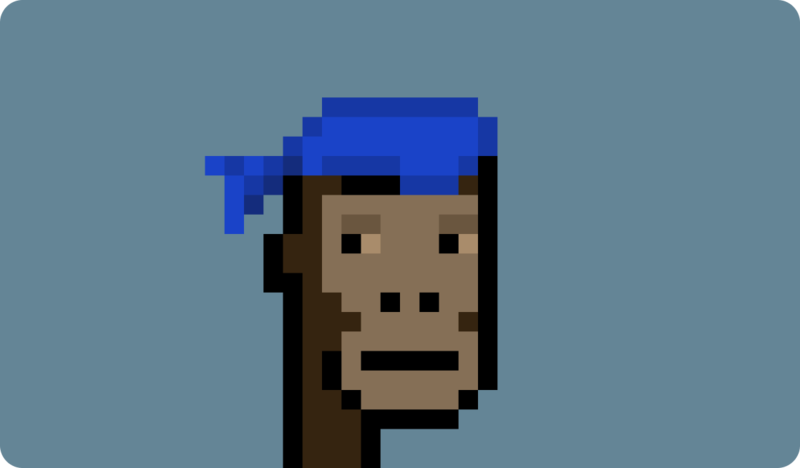 CryptoPunk #4156 is the eighth most expensive NFT sold, and one of the most notable and recognizable CryptoPunks in the NFT space. Not only did renowed digital artist Beeple featured this punk in one of his art pieces, #4156 also proceeded to launch Nouns – another notable NFT project known for its unique release and astronomical prices.

CryptoPunk #4156 was sold on December 21, 2021, for a whopping 10.26 million dollars after some dispute with the creators over commercialization rights. The original owner of Punk #4156 had bought it for $1.25 million before selling it nine months later at a profit of almost tenfold. 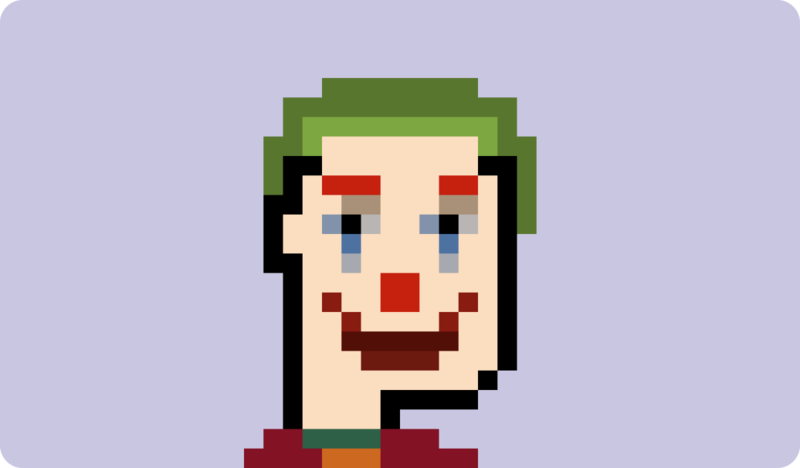 Tron is one of the blockchains with its own version of CryptoPunks. While TPunks typically don’t fetch high profits, in August 2021, Justin Sun, the co-founder of Tron, bought TPunk #3442 for $10.5 million. TPunk #3442 shares similar features with the Joker.

Objectively, this TPunk does not appear to be worth millions, but Justin Sun’s status definitely contributed to its high valuation. In the end, Sun donated the NFT to APENFT, a Tron-based project dedicated to tokenizing artwork on the blockchain. 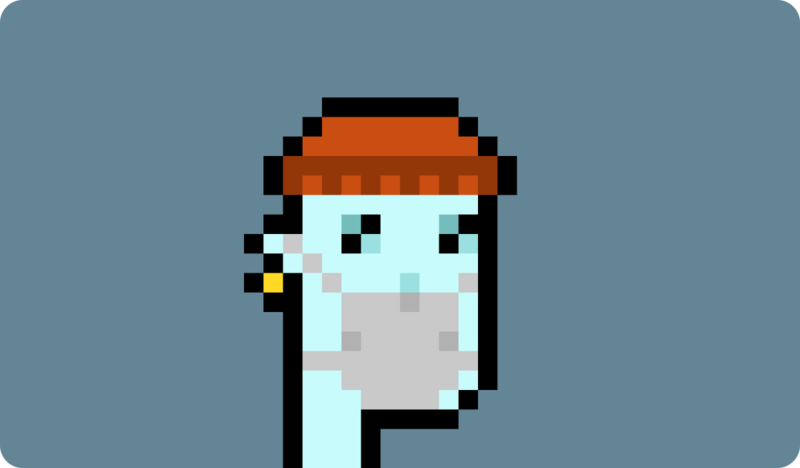 CryptoPunk #7523 is among the nine, rare ‘Alien’ punk types created by Larva Labs. Its medical mask feature pays homage to the COVID-19 pandemic, giving it somewhat a special significance. This tribute has been one of the main reasons why Shalom Meckenzie, the largest shareholder of DraftKings, purchased it at Sotheby’s ‘Natively Digital’ auction for a staggering $11.8 million.

Besides, CryptoPunk #7523 has other special accessories such as earrings (only 2559 punks have earrings) and a knitted cap (just 419 punks have knitted caps). 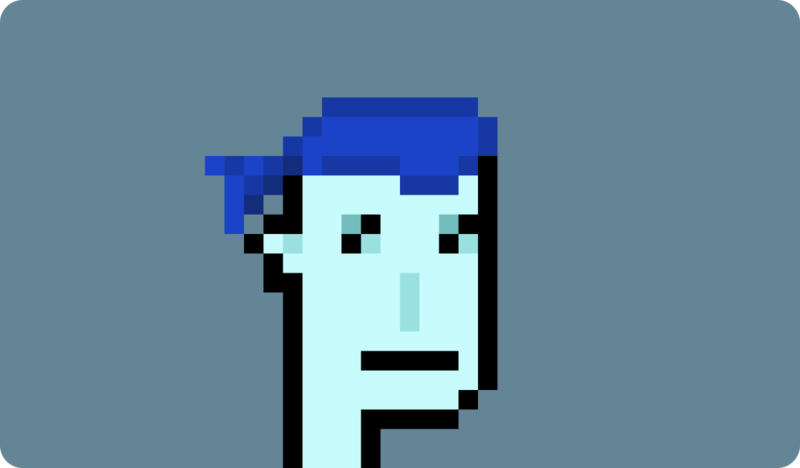 CryptoPunk #5822 is the most expensive CryptoPunk NFT ever sold – the CEO of Chain, Deepak Thapliyal, purchased it for $23.7 million in February 2022. Also an ‘Alien’ CryptoPunk, it fetched a high amount because it forms the collection’s rarest Punk Type being only one of nine only punks in the entire 10,000 collection. Moreover, #5822 is among just 333 punks with a bandana.

CryptoPunks are 10,000 avatars on the Ethereum blockchain, created in 2017 by Larva Labs; the collection’s intellectual property was subsequently acquired by Yuga Labs in March 2022. Since its inception, it has become the perennials of NFT profile picture projects, giving rise to a whole generation of PFP NFTs – including the Bored Ape Yacht Club. 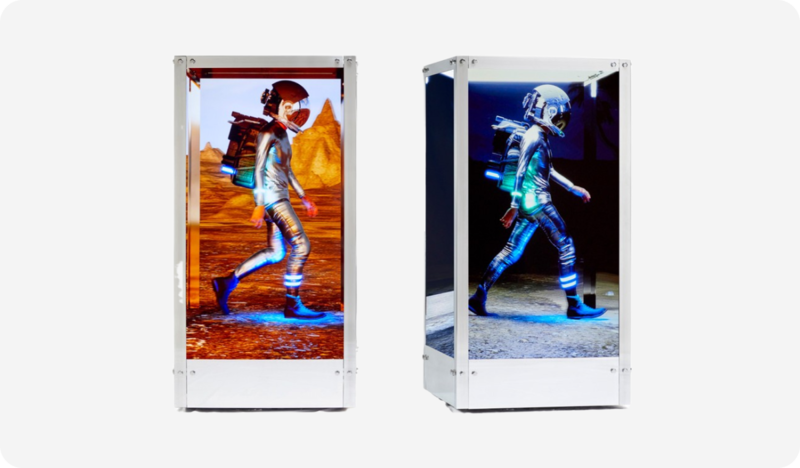 This is the first real-world artwork of Beeple – a 3D moving sculpture with four screens. It shows an infinite film of an astronaut exploring places at different times. HUMAN ONE NFT reveals the creator’s artistic determination outside the digital space. It is thought that the inspiration behind it originates from tests merging several televisions into several shapes and patterns.

It’s important to note that this piece changes with time. While Beeple lacks the ownership rights of HUMAN ONE, he remotely accesses and updates it regularly. The piece received a bid of $25 million at Christie’s auction in November 2021, which accumulated to $28.9 million when fees were included. 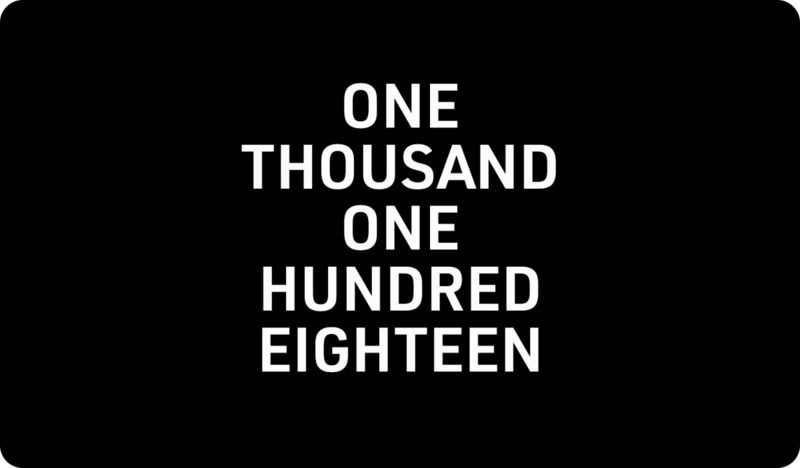 The Clock is the third most expensive NFT sold and has a slightly eccentric tale. This is a creation of PAK intended to fundraise for Julian Assange’s defense following his controversial 2019 detention.

Assange is still in prison on charges of spying on the US government, primarily through the WikiLeaks website he started. The piece is basically a clock showing the days since Assange was imprisoned.

The Clock NFT sold for $52.7 million (16,953 ETH) in February 2022 to AssangeDAO, a decentralized autonomous organization (DAO) created to manage the sale. Apart from designing The Clock, the creators also permitted people to develop a series of NFTs with censored messages for free. The earnings from the series are channeled to pro-freedom organizations the creators choose. 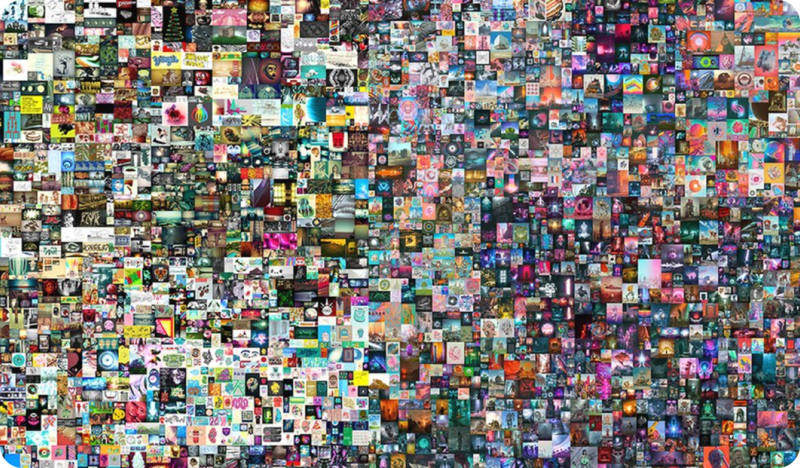 The First 5000 Days is the second most expensive NFT sold so far. It was designed by Michael Winkelmann, a digital artist more famously known as Beeple. The piece was sold at Christie’s, with the first bid of approximately $100 placed by traditional buyers followed by bigger offers from cryptocurrency investors.

Since Beeple was popular among crypto users with big sales such as Crossroads, it took a few hours for the NFT to shoot up to $1+ million. On February 21, 2021, Beeple accepted a $69 million bid for the piece. MetaKovan, the founder and CEO of Metapurse, an NFT investment fund, submitted the bid. 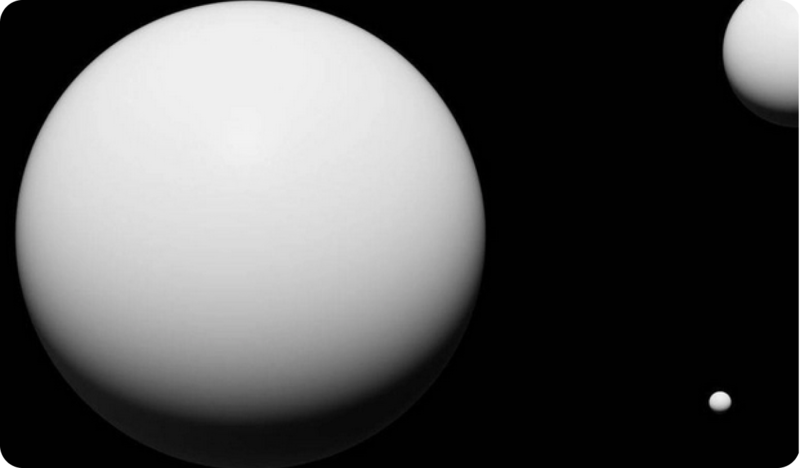 The Merge is a virtual artwork designed by an unknown artist nicknamed Pak. It was auctioned on December 6, 2021, for $91.8 million on the Nifty Gateway marketplace. The Merge was divided into 312,686 pieces and circulated to 28,983 investors; in other words, this NFT was a collection of works people could purchase.

The Merge comprises three big white masses containing a black background. The more mass investors acquired, the bigger their mass would become. Besides, the piece has an inbuilt scarcity mechanism, which ensures its token supply declines with time. Each transferred Merge token unites with the token of the recipient address, leading to more mass value and one token. 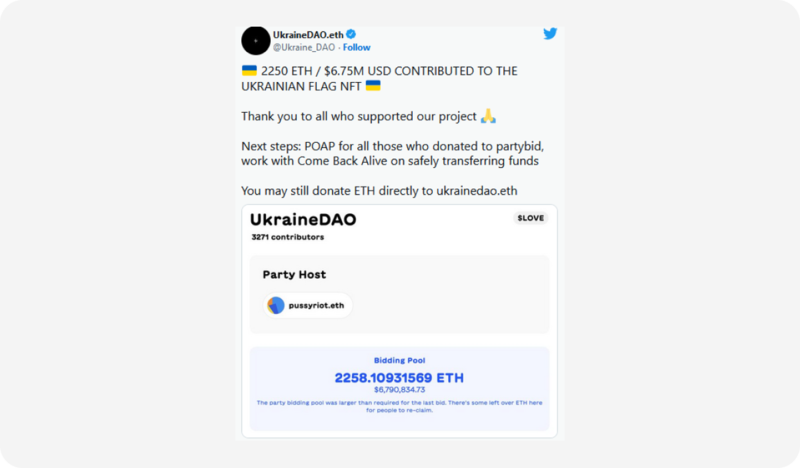 An NFT representing the Ukrainian flag was auctioned for $6.75 million in March 2022. The earnings were channeled to Come Back Alive, an entity responsible for giving provisions to Ukrainian citizens and the military.

UkraineDAO managed the auction, a fundraising campaign steered by Russian art collective Pussy Riot and NFT studio Trippy Labs. The winning bid was placed by a pool of 3,271 contributors through PartyBid.

The relevance of the bid and the unique mechanism of PartyBid definitely enabled the NFT to gain a high valuation. The sale further set a precedent for fundraising methods to incentivize even great prices potentially. While this piece doesn’t make it to the top 10 most expensive NFTs sold, it is an honorable mention of its special fundraising goal and the crowdfunded auction. 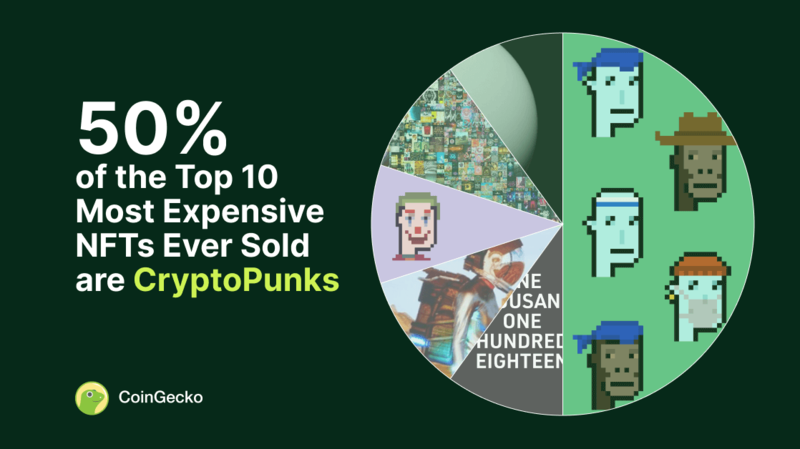 As one of the pioneers in the NFT ecosystem, CryptoPunks seem to now be synonymous with NFTs and become a cornerstone to the Web3 subcultures. From rounding up the list of the Top 10 Most Expensive NFTs Ever Sold, it is interesting to note that CryptoPunks dominate the rankings, with five from the collection making it to the top 10. 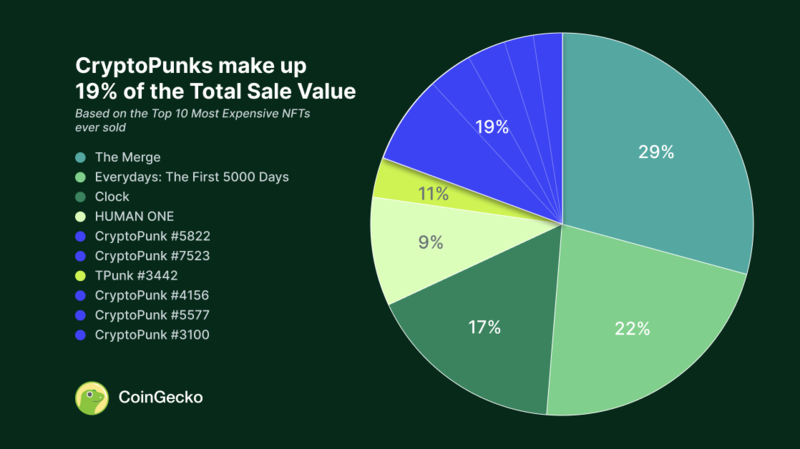 At fifth position, CryptoPunk #5822 is the most expensive CryptoPunk ever sold. It is one of nine ‘Alien’ CryptoPunks that exist in the entire CryptoPunks collection, and forms the collection’s rarest Punk Type. CEO of Chain, Deepak Thapliyal, purchased it at approximately US$23.7 million in February 2022.

Similarly, CryptoPunk #7523, ranked six, is an ‘Alien’ Punk Type, and features a medical mask that pays homage to the COVID-19 pandemic period – one of the main reasons why Shalom Meckenzie, the largest shareholder of DraftKings, purchased it at Sotheby’s ‘Natively Digital’ auction in June 2021, for approximately US$11.8 million.

CryptoPunk #4156 is the eighth most expensive NFT sold, and also one of the most notable CryptoPunks in the NFT space – previously featured by renowned digital artist Beeple and associated with the launch of another significant NFT project, Nouns. #4156 was sold in December 2021, for US$10.26 million.

CryptoPunks are 10,000 avatars on the Ethereum blockchain created in 2017 by Larva Labs. The CryptoPunks NFT collection has a floor price of 63.95 ETH and a market capitalization of $813 million at the time of this writing.

To learn more about NFTs, check out the 10 most exciting new Solana NFTs in 2022 or a guide to getting early access to NFT drops!

If you use these insights, we would appreciate a link back to this article on CoinGecko. A link credit allows us to keep supplying you with future data-led content that you may find useful.