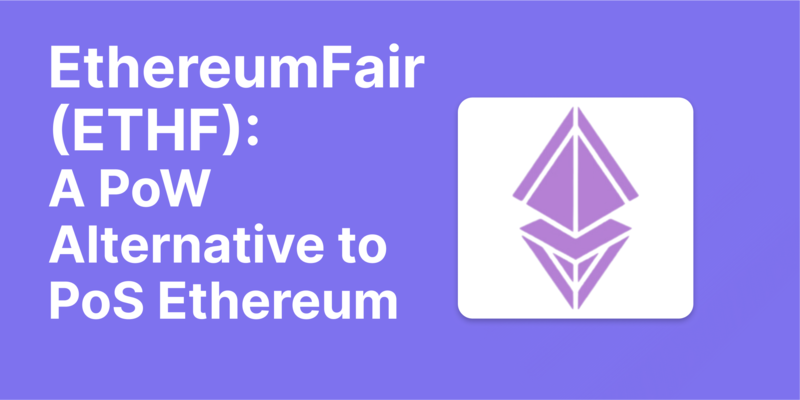 Founded in 2020 and brought into the open in the third quarter of 2022, EthereumFair has drawn a good amount of attention from the rest of the crypto space since the Ethereum blockchain completed its switch to Proof-of-Stake (PoS) consensus algorithm.

You might find different tickers for EthereumFair across exchange platforms and the rest of the internet. The project’s official Twitter page has reiterated that the ETHF ticker is the proper ticker for the EthereumFair coin. Regardless, the ETF ticker is also used to represent the project on some tracking platforms, exchanges, and social media posts. We will be using the ETHF ticker for the rest of this content.

EthereumFair is building its nest away from the original Ethereum blockchain. After a successful fork, it is nursing an independent ecosystem by providing a platform for developers to build on its PoW blockchain. Since launching its network, the EthereumFair blockchain has reportedly processed over 1.7 billion transactions and handled over 50 million smart contract creations. 200 million wallets have also been created according to statistics found on its official page.

Statistics from Oklink also claim that ETHF has a block time of 0.13 seconds and processes 0.11 transactions per second. Over 500,000 ERC-20 tokens have been created, with thousands of NFT tokens already live on the chain.

Despite impressing the general crypto community with the numerous innovations it has churned out since launching in 2015, the Ethereum blockchain suffers from a lot of user experience issues. Most of these issues arise due to the high rate of adoption it enjoys.

With over 71 million wallets created in the past six years and an excess of 400,000 daily users, the original design of the Ethereum blockchain was unable to handle the continuous growth in demand without running into some hitches. At best, these issues were mild and negligible; at worst, they were enough to make users seek cheaper and more efficient alternatives.

With a speed of 20 transactions per second; some of these transactions fail despite the high fees while others would take many minutes (sometimes, over an hour) to be completed. In addition to these, concerns have been raised regarding the energy consumption and the environmental impact of the Proof-of-Work algorithm used by Ethereum and other blockchains.

The size of Ethereum’s archival nodes currently sits at over four terabytes (4Tb) and the actual blockchain size is well over a hundred gigabytes. Each validated block adds two megabytes to this already huge figure. The Ethereum blockchain according to many ‘will never scale’. In 2019, a Bloomberg report claimed that the Ethereum blockchain is ‘almost full’.

Part of the changes includes the introduction of blockchain sharding to tackle Ethereum’s scalability issues and a switch to the Proof-of-Stake (PoS) consensus algorithm to make the blockchain agile, and more flexible. PoS is also presumed to be a more environmentally friendly approach to blockchain computing.

While the Proof-of-Work consensus algorithm requires miners to safeguard the blockchain network by connecting their devices to the network, running a node, and solving complex mathematical problems to validate a block; Proof-of-Stake requires validators to lock up their assets on the network and be chosen to validate blocks according to how much assets they have committed to the network. Both miners and validators are rewarded for securing the network in these ways.

A switch to Proof-of-Stake means that the Ethereum blockchain would do away with miners and the PoW consensus algorithm. To run a node on Ethereum’s POS network, a validator only needs to stake 32 ETH.

However, this arrangement (switch to PoS) wasn’t pleasant to miners who have stayed committed to safeguarding the blockchain throughout its existence through the PoW consensus algorithm. Since the upgrade was announced and building up to the last phase of the switch to PoS (termed The Merge), miners on the Ethereum network sought new homes while a split faction resolved to fork the Ethereum blockchain and uphold the PoW consensus system.

EthereumFair developers were part of the split faction that sought to maintain the POW algorithm. Another faction is the EthereumPoW (ETHW) developers. These split factions created new blockchains that mirrored the original Ethereum blockchain. EthereumFair emerged in the last quarter of 2020 but mainly operated in the Chinese language and only developed support for other languages later in the third quarter of 2022. EthereumPoW was launched a few months before the stipulated switch to POS.

On September 15, 2022, the last phase of the migration to PoS was completed as the Ethereum blockchain transitioned to the Proof-of-Stake algorithm. In response, EthereumFair launched its blockchain a couple of days later and has since then, channeled efforts towards building a sovereign POW network.

EthereumFair coin (ETHF) is the native coin of the EthereumFair blockchain. It is designed to power the ETHF blockchain and also grow along with the project. Following the hard fork, ETHF coins were airdropped to existing Ethereum users at a ratio of 1:1. That is, every Ethereum (ETH) holder received ETHF coins equal to the number of Ether held.

Supply and distribution statistics for EthereumFair are yet to be verified, however, the circulating supply is expected to be the same as the original Ethereum blockchain. The total supply is also infinite and expected to grow as miners are rewarded.

Like the original Ethereum blockchain, EthereumFair plans to expand its coin supply through miners’ rewards. Miners on the EthereumFair network will receive ETHF for validating a block. According to ETHF developers, the mining difficulty has been reduced to increase miners’ chances of earning rewards and profiting from running an ETHF node. The current mining difficulty is 655.0926T according to data from Minerstats. 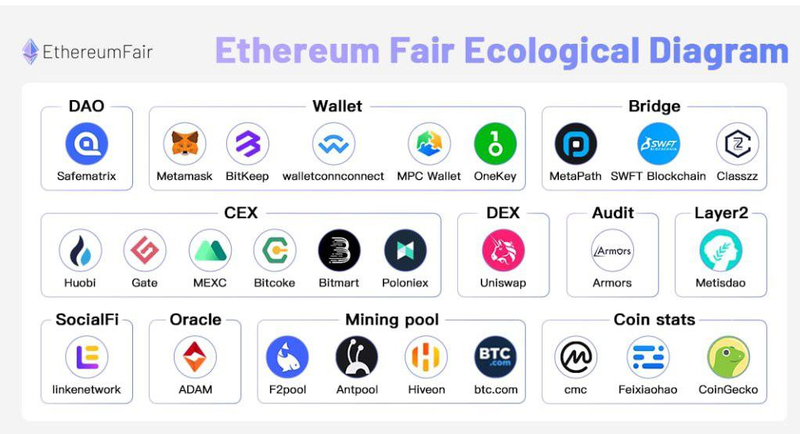 On the EthereumFair chain, new decentralized applications are already building their solutions and offering better approaches to existing solutions. MemorySwap is one of the earliest decentralized exchanges to launch on the EthereumFair chain. Alien exchange and MetaPath have also launched on the PoW chain. MetaPath is a Dex aggregator; it collates trading prices of a selected pair across several Dexes and allows traders to choose the best rate.

In partnership with MemorySwap, Richmoon, a GameFi project has also launched on the EthereumFair chain. Richmoon describes itself as a “Web3 small game platform.” Musse NFT marketplace has also announced support for EthereumFair NFTs.

Reported information suggests progress in EthereumFair chain’s growth as an inclusive platform for decentralized solutions. Further growth is expected as the platform continues to welcome new projects and older EVM projects that wish to build on the PoW chain as well.

EthereumFair is a spin-off from the original Ethereum blockchain. It copies the majority of features of the (now defunct) PoW Ethereum chain. Due to the 1:1 ETHF airdrop for ETH holders, both projects currently have the same number of tokens in circulation. This will likely change relative to the emission rate in the new chains.

Here’s a summary of the differences between EthereumFair and the current Ethereum blockchain. 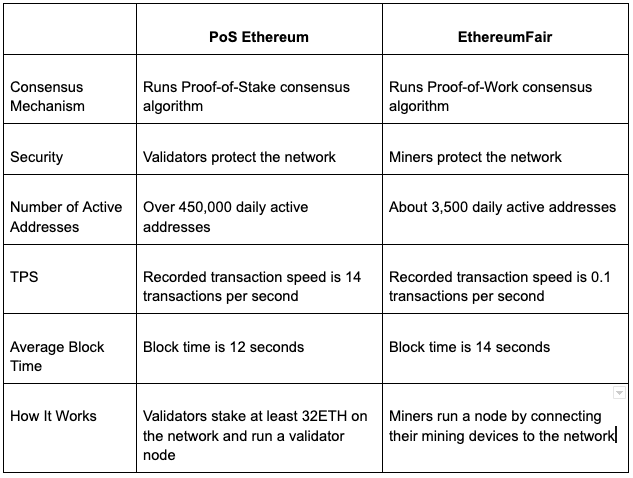 Ethereum’s migration to PoS set off a flurry of events. For miners, a new home has to be found. While a good percentage simply switched their mining facilities to other cryptocurrencies, others were determined to retain the POW infrastructure. To this effect, a couple of Ethereum Proof-of-Work forks have emerged since the move to PoS was completed.

EthereumFair (ETHF) and EthereumPoW (ETHW) are the most prominent forks of Ethereum that seek to preserve the fair distribution of the Proof-of-Stake consensus algorithm. Both chains share many similarities. Apart from running the PoW algorithm, they both have the same number of tokens in circulation. ETHW conducted a 1:1 airdrop to ETH holders.

Here’s a summary of the major differences between both projects as of time of writing:

To find out more about how Ethereum, Ethereum Classic, EthereumPoW and EthereumFair are sharing the market, visit GeckoTerminal’s ETH Wars’ page.

How to Connect to the ETHF Chain

The EthereumFair network can be added on MetaMask and used across DeFi and other decentralized applications built on its chain.

With over 10 million confirmed users, MetaMask is one of the most used Ethereum wallets. It has received support from Ethereum developers and is arguably one of the most trustworthy wallets to store your ether and other cross-chain tokens and even more. MetaMask’s multi-chain support allows you to access cross-chains and layer 2 networks.

Here’s how to add the EthereumFair network to your MetaMask wallet.

MetaMask comes in a Chrome extension and a mobile application; whichever you use, the steps to set up are the same. I assume you already have the Metamask Extension or wallet installed and your Ethereum account set up properly. If not, simply download and set up your wallet properly, and remember to safeguard your seed phrase… it’s very important!

Log into your MetaMask, click on the network bar in the top right corner and select Add Network from the drop-down.

In the form that pops up, fill in the following accordingly;

The crypto space is very democratic. This democracy isn’t limited to the freedom to invest, but also includes the freedom to invent and uphold personal and group opinions where there are differences. The original Ethereum blockchain switching to PoS as a foundation to other changes coming to the network is a positive development. A scalable, fast, and cheap Ethereum blockchain means more than just an upgrade to the crypto space.

Notwithstanding, the Proof-of-Work algorithm is the earliest blockchain consensus algorithm and is much respected by older participants. This is not just due to its inclusiveness but also due to its reputation as offering a more decentralized approach to blockchain security, arguably. The acceptance of Proof-of-Stake is growing as novel blockchain projects are willing to sacrifice security and decentralization for speed, scalability, and affordability.

EthereumFair and other Ethereum forks, like Ethereum Classic and EthereumPoW have chosen a different path – to cling to the old ways. This, if done well, is also a positive development, as it serves a section of the crypto community that believes in Proof-of-Work. EthereumFair will hope to leverage on this to attract users and developers to build a thriving ecosystem, and if possible improve the original design by solving the problems it faced in a different way. A majority of Ethereum developers will expectedly focus on the PoS chain, but forks like EthereumFair still stand a chance of emerging as strong contenders in the smart contract and EVM space.

As a standard, do apply caution while interacting with smart contracts and also do your own research before investing in any cryptocurrency project.