*Note: Utilizing the strategies covered in this article does not guarantee winning trades and this article is not intended to serve as financial advice.

Technical analysis in cryptocurrency draws on mathematical indicators based on previous price data in a bid to understand and predict the direction of future trends. Crypto technical analysts utilize mathematical relationships for routine investments, from using tokenomics calculations to make investment decisions or even undertaking complicated trading calculations such as the golden ratio and golden pocket derived from the Fibonacci numbers and Fibonacci sequence.

Cryptocurrency trading is only one out of the many applications of the golden ratio and the Fibonacci numbers. In fact, these two terms are related to almost anything you can think of. From natural arrangements to a user interface design that we find pleasing, the belief is that we’re subconsciously attracted to objects and images that use the golden ratio.

So, what is the golden ratio?

What is the Golden Ratio?

Also known as the “divine proportion”, the golden ratio represents a ‘perfect’ relationship between a pair of numbers. This relationship is peculiar in the sense that certain mathematical calculations using the number pair return the same result, which is equal to or very close to 1.618.

A pair of numbers with this sort of relationship are known as Fibonacci numbers. This relationship exists between a sequence of numbers; 2, 3, 5, 8, 13, 21, 34, 55, and so on, which is known as the Fibonacci sequence. The next number in the sequence is obtained by adding the last two figures ( in this case 34 and 55).

While the Fibonacci numbers and sequence are named after Fibonacci, they were already used by the ancient Egyptians and Greek, who used them to construct historical architectural marvels like the Great Pyramid and the Parthenon.

Beyond the marvels of nature and ancient architecture, this ratio could also apply to your favorite crypto asset’s trading charts. So how do technical analysts apply the golden ratio to trading?

How Does the Golden Ratio Work in Trading?

Traders have identified certain important levels in asset price development. These levels coincide with general traders’ behaviors, and the Fibonacci sequence as well! The first two levels of this sequence are 23.6% and 38.2%. Ready to attempt guessing the next number with your knowledge of the Fibonacci sequence? That’s right, the next number on the sequence is 61.8%! However, in crypto, the 50% level is also part of this sequence.

This makes the vital levels in crypto trading 23.6%, 38.2%, 50%, and 61.8%. These levels represent price development stages. Cryptocurrency traders make trade decisions by estimating the next price event at each level. The belief is that these levels coincide with human behaviors during uptrends and downtrends and translate into resistance, support, and price pullback for the specific crypto asset.

The reverse is the case when an asset is in a downtrend. These levels become major support levels for the asset’s price. The sell-off intensity is expected to meet a brief halt after the first 20-25% drop. In some cases, the downtrend stops at this point. However, if the sell-off continues, the next support level is some levels after the next 10-20% drop with a major resistance coming just before or after a 60% price drop, after which there is the likelihood of a steep upward retracement.

Before undertaking any investment decisions or adopting a certain investment strategy, do your own research and decide if it’s suitable for you.

In between these levels is another equally important phenomenon in crypto trading. This is known as the Golden Pocket.

What is the Golden Pocket?

If an asset isn’t in a total hazard condition (positive and negative), the golden pocket is an important target level a trader should look out for. The golden pocket represents a complete price reversal level for an asset and a very likely point of a slow or aggressive uptrend. Most traders assume this to be between the 0.618 (-61.8% from the previous high) and 0.65 (-65% from the previous high) areas.

However, the golden pocket can occur below these areas depending on other factors that may affect the demand and supply statistics for the asset. This includes announcements that affect traders’ behavior. 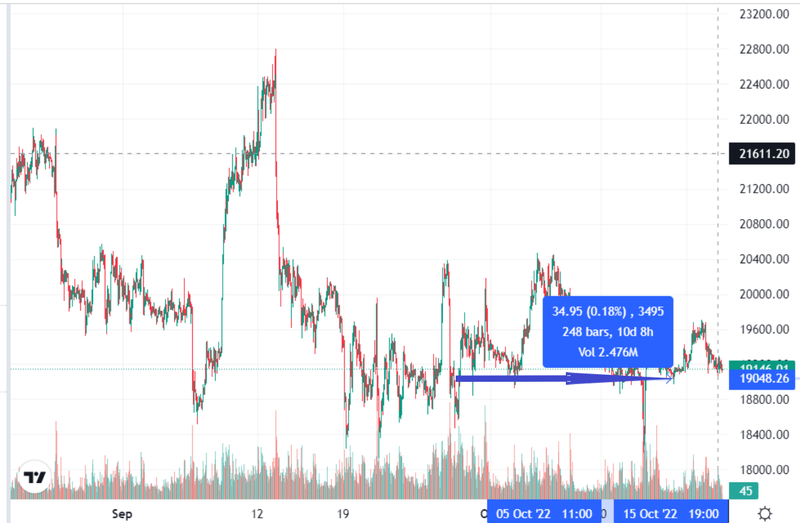 The blue arrow in the chart above shows a gradual retracement after a complete reversal. The retracement commences a little below the previous high. This level is the ‘golden pocket’.

The golden pocket is a flexible level. In plain terms, it is simply a point where a given uptrend reverses completely. Just below the total reversal point is where the golden pocket occurs. At this point, the asset is more likely to start retracing upwards again.

The complete reversal point can be easily deduced from the charts, however, the golden pocket can be chosen as any arbitrary point below this level. The golden pocket is considered a good entry point for traders.

In order not to miss a tangible uptrend, traders might decide to enter the market at levels just below the reversal point or wait out for even lower levels. 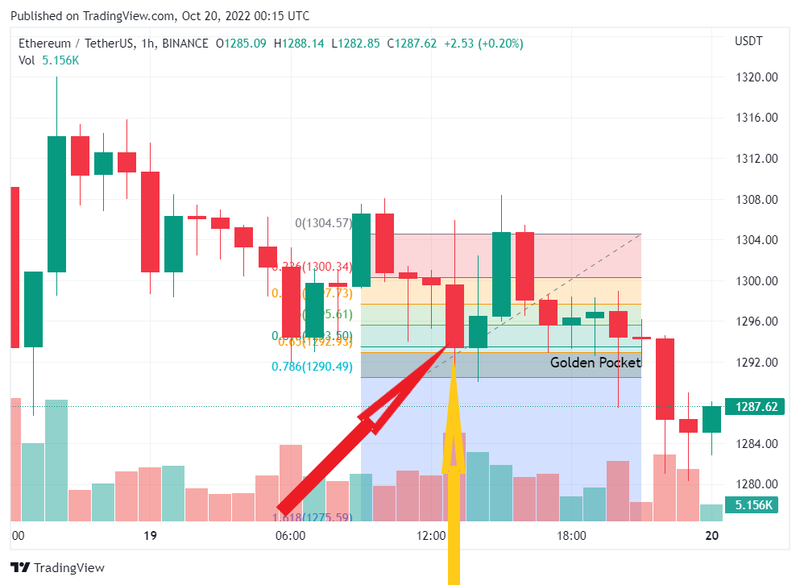 In the image above, the reversal point is indicated using the red arrow. The golden pocket is ideally at areas between this point and 0.65 (indicated using the gold-colored arrow).  However, a trader could decide to wait even further before entering the market. From the chart above the targeted bounce level is the 0.65 level indicated by the golden line. This is marked with the  “Golden pocket” text. Do note that the stated price loss is relative to Ethereum coin’s ATH ($4,800)

Do note that the price could continue to fall below these levels, and uptrends could set in before a complete reversal.

How Do I Use the Golden Pocket?

The Ethereum price chart below shows different instances of price uptrend, reversal, and continued uptrend within the 24hrs timeframe. Reversal repeatedly extends below the former peak before going ahead to create new uptrends and new peaks in some cases. The point that sits just below previous lows is the golden pocket. Unfortunately, estimating the golden pocket isn’t as straightforward as the reversal points which can be easily seen in the chart. 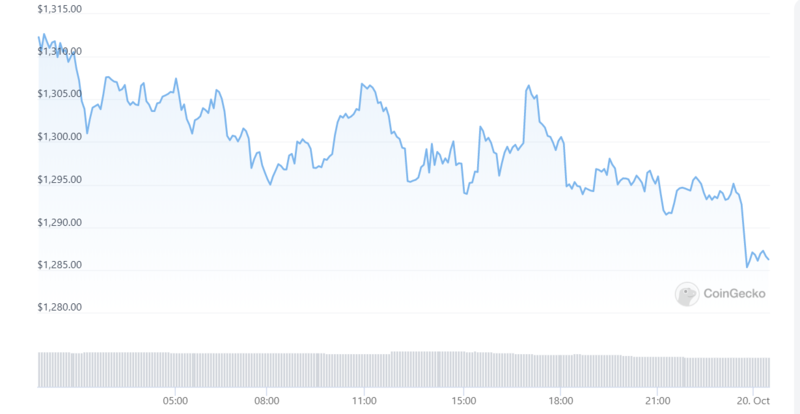 The chart above can be seen charging upwards after a steep fall on the 24hrs chart and printing a wide golden pocket. After a reversal is confirmed, choosing the golden pocket level should be subject to even more deliberations. This should be guided by presiding market conditions and other external factors that might be particular to the asset of interest.

If you’re wondering how to set up your charts to indicate these levels, read on to find out how you can do that using the popular Tradingview platform.

How Do I Add Fibonacci Lines to My Chart?

If you’re using a different trading application, it might also have a similar feature.

But here’s how you can use Tradingview.

Now click on the chart and scale your lines through an area of the chart you wish to cover.

Your lines should appear with different colored demarcations for price levels covered by the indicated Fibonacci level.

How to Set Up the Golden Pocket

To sketch your chart and mark the golden pocket for the selected area; hover around the mapped area to reveal the modification icons.

From the icon list that appears, click on the settings icon to add a desired Fibonacci level.

The panel that appears next shows the different Fibonacci levels indicated in the chart and the line color that represents them.

Select any of these levels and edit to include your estimated golden pocket.

The image above sets the golden pocket at 0.65 (-65% from previous peak). You can choose to enter other estimated levels based on your personal preference.

The Fibonacci numbers and the golden ratio might all be a natural coincidence, yet they have produced very efficient (and aesthetic) systems. The golden pocket is another instance of these numbers being oddly significant and leading up to seemingly accurate estimations, especially in normal conditions. The accuracy of decisions drawn from the golden ratio and Fibonacci is still subject to certain factors that could affect the normal proceeding of the market. These factors should be well noted when making trade decisions using the golden ratio and golden pocket system.

Mathematically derived trading decisions are handy, but notwithstanding, they still have a relatively wide error margin. These margins are hardly bridgeable; therefore, it is important to apply caution while trading using any strategy. Beyond choosing trading strategies, paying attention to presiding conditions for the general market and the particular asset is important as well.

To learn more about the crypto markets, you may be interested in the Crypto Fear and Greed Index and What are the Golden Cross and Death Cross?

The strategies covered in this article are for information purposes and are not intended to serve as financial advice.