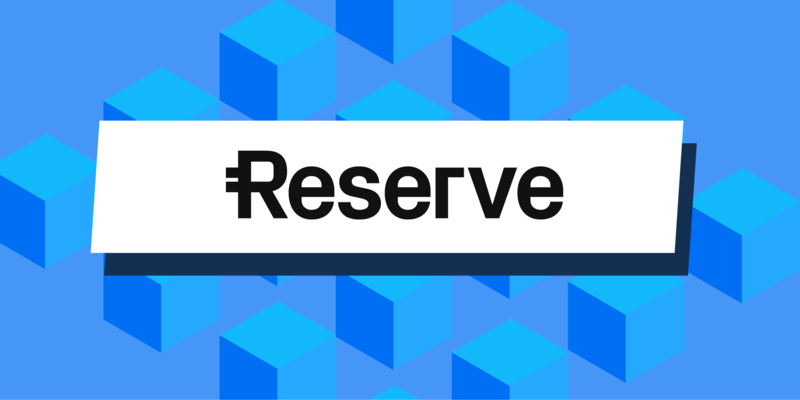 As a fix (which has proven to be very effective); cryptocurrency projects are developing protocols that build up and promote a more stable value system. A stablecoin is the core of these projects. Stablecoins are structured to be resistant to constant changes in value, although the stablecoin market is largely made up of fiat-backed stablecoins.

Reserve is looking to challenge that by tokenizing other assets beyond currencies.

After their 2019 IEO (Initial Exchange Offering) on Huobi Prime, Reserve Rights (RSR) has channeled efforts toward developing an asset-backed stablecoin system. Asset-backed stablecoins maintain a stable value through support by assets of equivalent value locked in a contract and added to maintain value.

Reserve targets the problem of inflation. Their platform allows users to create asset-backed currencies (“RTokens”), which are fully-backed stablecoins that are always redeemable for those underlying assets. By allowing users to create their own RTokens, they’ll be able to tailor their own “perfect” basket to hedge against inflation. We’ll discuss RTokens in more depth below.

Reserve currently operates in Argentina, Peru, Venezuela, Columbia, and Panama, with plans to launch in Mexico before Christmas. Based on data shared by the team, they see $3.6bn per year in stablecoin transactions on their platform, with 650,000 everyday users, including companies using Reserve Rights for payroll, or carrying out remittance or international/institutional payments at zero cost. 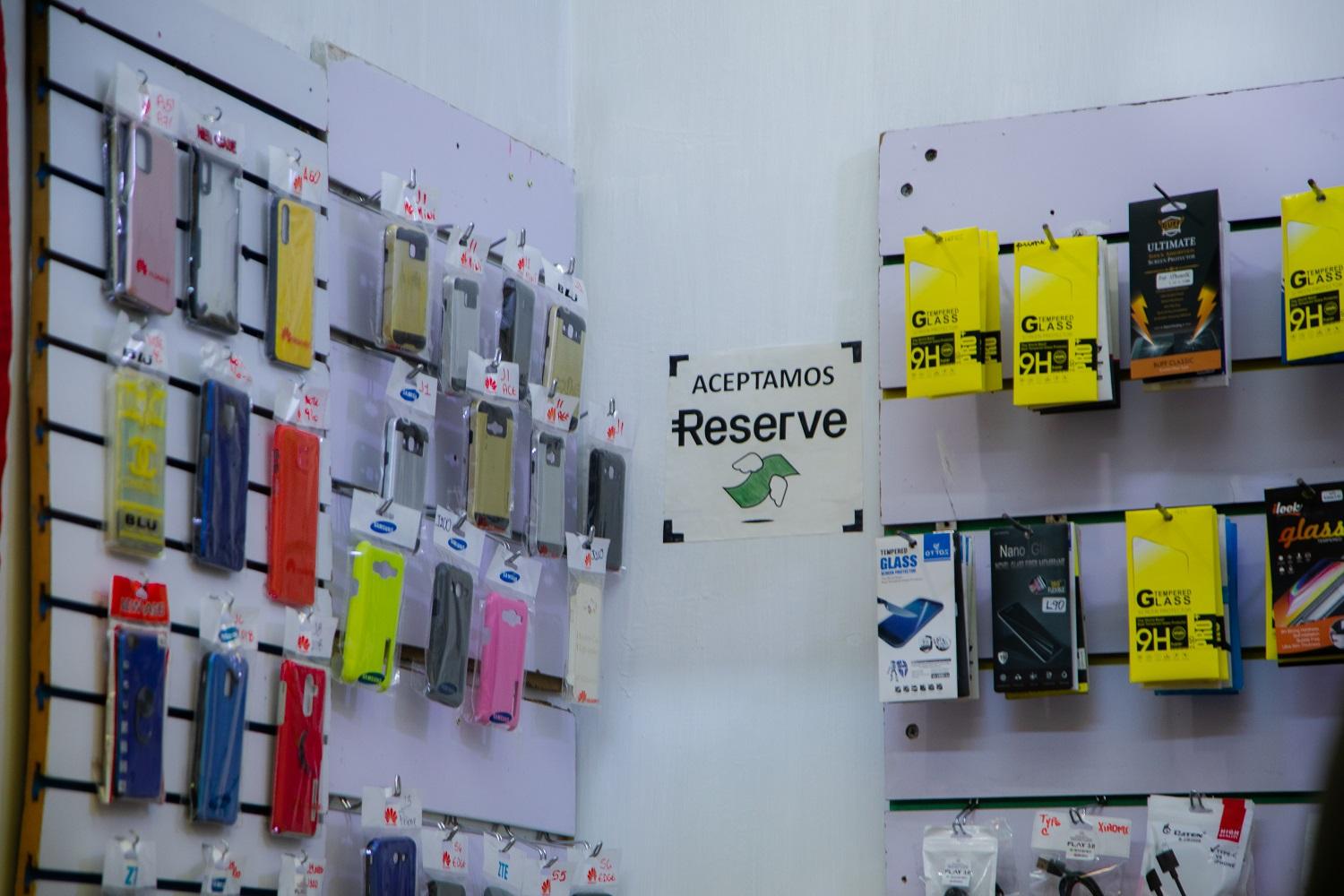 How the Reserve Protocol Works

To deliver a token of a stable value, the Reserve protocol will issue a stablecoin backed by a basket of collateral assets. For example, the RSV stablecoin (more on this later) s collateral assets currently consist of three fiat-backed stablecoins; USDC, TUSD, and USDP (Pax dollar).

To mint RSV, these fiat-backed stablecoins are supplied at an equal ratio. For instance, to mint $12 worth of RSV, a user locks up $4 worth each of USDC, TUSD, and USDP. The collaterals are held in the Reserve protocol’s vault and the RSV issued can be used like any other cryptocurrency.

And the issued RSV can be redeemed for the basket of assets at will. The redemption process is straightforward; RSV holders who wish to redeem their token interact with the Reserve protocol to exchange RSV for a basket of stablecoins.

The current view of stablecoins in the crypto space generally follows this template: Most stablecoins are pegged to a national currency and the bulk of development activities revolves around maintaining the value it shares with the national currency. This alone is a brilliant idea but could be expanded in many ways.

Stablecoins are usually run by an organization or a designated project team that enacts a structure for how their stablecoin will work. This stream of procedures limits the scope of stablecoins and who can develop stablecoins. Reserve Rights is challenging this way of working and suggests more diversity in the creation of stable assets and the design for their peg.

In line with this goal, it introduced the concept of RTokens. The RTokens protocol lets anyone create a stable and backed coin. It simplifies this creation process and gives the creator the freedom to choose a model for the functionality of the stable asset.

RTokens use a similar issuance and redemption model as the RSV stablecoin coupled with on-chain protocol operations to harvest yield and share with users, while always managing collateralization safety. For RTokens, the asset used to mint the stable asset and the ratios in which they will be provided are properly specified by the token creator. The chosen assets become the collateral token for that (particular) stable asset. To mint to the stable asset (RToken), the client locks up in the collateral asset(s) in the stated ratio(s). RToken is also an experiment to discover the best collateral asset combination for a stablecoin.

Staking and Revenue Programs for RTokens

To ensure the RToken, RSR token holders are invited to stake their (RSR) tokens on the RToken. RSR holders who stake to an RToken are eligible to share revenue upside as well as slashing risk in the event of collateral or technical failure.

The dividend pool is the portion of RToken’s total revenue generated that is not being distributed to RToken holders, paid in RSR tokens. RTokens generate revenue through on-chain harvesting yield-bearing collateral from DeFi and in the future, tokenized real-world assets.

The amount of reward earned by each staker depends on the revenue generated by the RToken, and the amount of RSR staked.

MobileCoin is launching the first RToken powered by the Reserve Protocol: eUSD (Electronic Dollar). Its competitive edge over existing stablecoins is that it can be transacted privately and cheaply, with settlement in five seconds or less and low transaction fees of $0.0025 that is paid in eUSD, without needing any other coins for gas. The eUSD will exist on the MobileCoin blockchain and these will be bridged from Ethereum, utilizing approved liquidity providers (financial institutions) that will mint, buy, and wrap the eUSD. After this, Reserve will verify the deposit and finalize minting the required amount of eUSD by co-signing a mint transaction with the liquidity provider, as illustrated in the chart below: 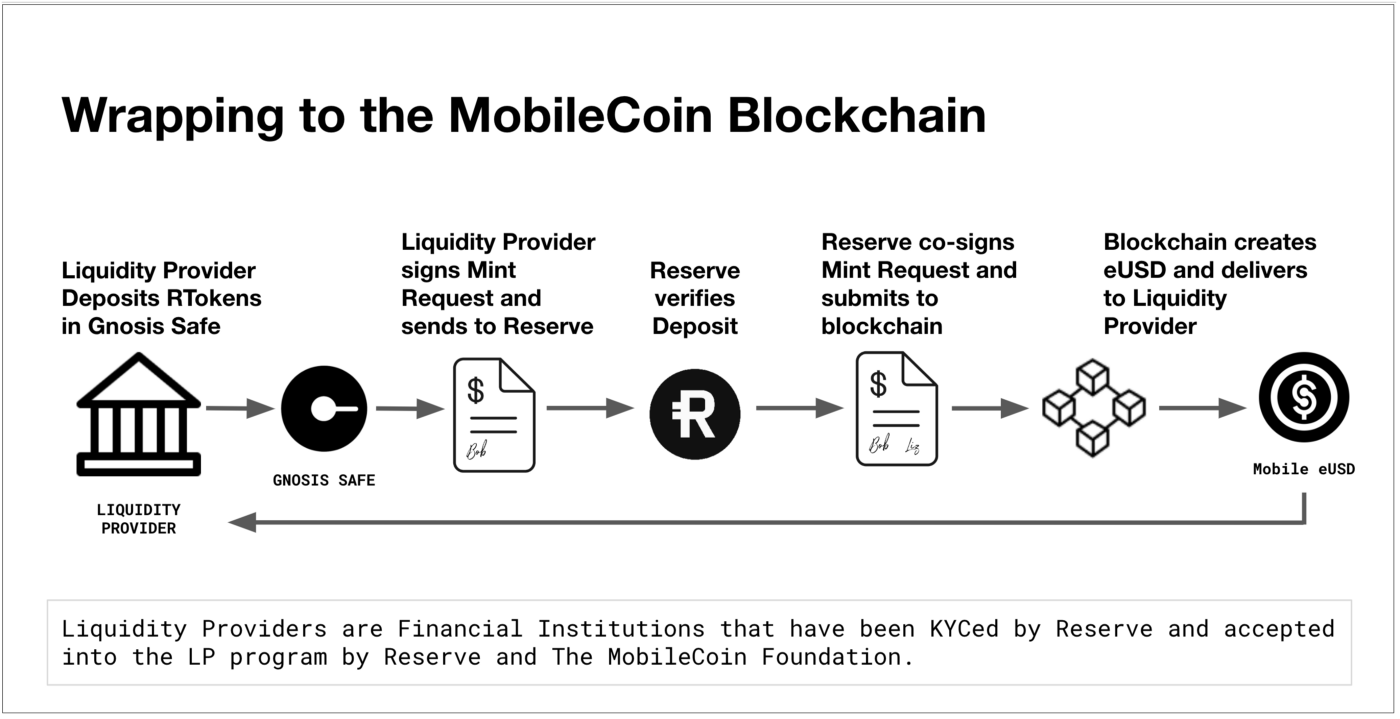 The collateral basket will include yield-bearing tokens such as USDC, TUSD, USDP, from popular DeFi protocols like AAVE, and Compound, complete with staked RSR for governance. 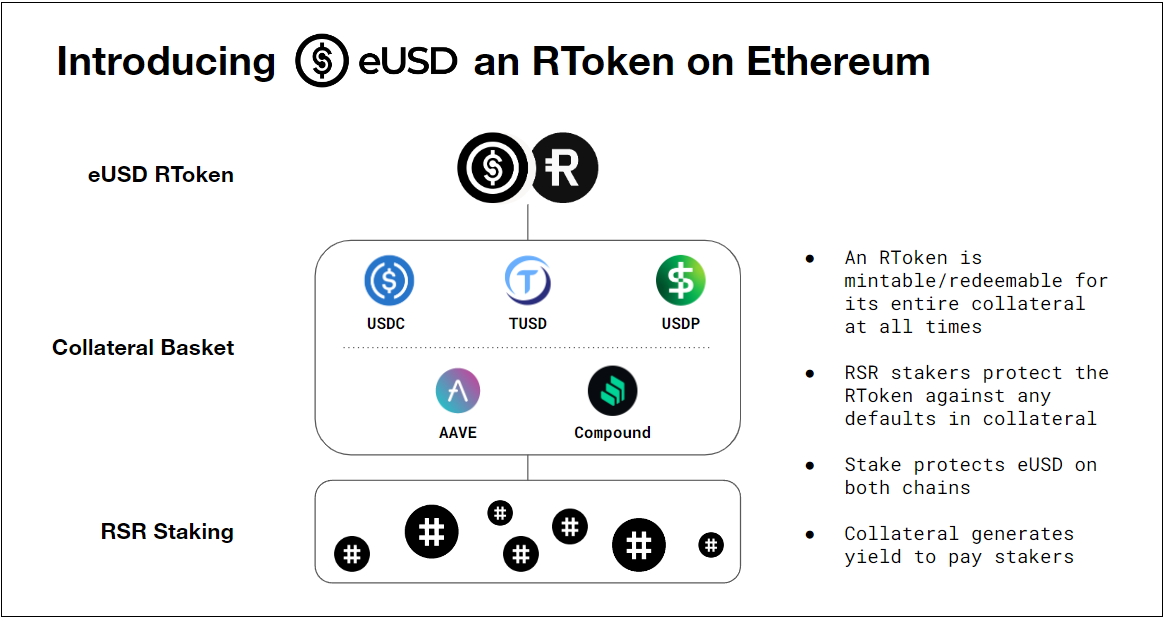 Reserve’s stablecoin protocol operates a multiple-token system featuring the RSR governance token, along with a token for every stablecoin issued on the protocol, where eUSD will be the first RToken. Currently, the Reserve Protocol also includes the token RSV.

RSV was the first “proto-RToken,” designed to allow the Reserve app to begin operations. As of now, RSV is a fully-backed stablecoin without governance, staking, or backstop-insurance. Eventually, the team’s plan is to replace the RSV in the app with an emerging RToken.

About twenty-eight (28) million RSV tokens have been issued so far, and the RSV price level is maintained at around $1. RSV is issued on the Ethereum blockchain using the ERC-20 token standard. RSV currently trades on LATOKEN, Bittrex, RSRs’ dex, and Gate exchange.

Unlike RSV, RSR is prone to value changes like any other normal cryptocurrency. Its value is not pegged to any level. RSR is an ERC-20 token functioning as the utility, reward, and governance token of the Reserve Rights ecosystem.

RSR also provides a layer of backstop insurance when staked on RTokens, in return for capturing yield for offering that protection. As the governance token, RSR will also guide the evolution of that RToken’s collateral basket via governance.

The Reserve Protocol factory smart contracts are permissionless, and not upgradeable by design. Protocol changes would require deploying new contracts to which each RToken’s governance may choose to opt-in or out. The RSR governance token is used by the community to govern RTokens separately, such as changes to collateral baskets or revenue shares.

RSR is also used to incentivize users of the RSR protocol. RSR token stakers are rewarded with more RSR tokens. The value of the rewards received is a factor in the number of RSR tokens staked and the revenue generated by the project.

The RSR token was also used by the project team to generate funding for further development of the project. In an IEO (Initial Exchange Offering) anchored by Huobi exchange, the Reserve Rights team sold about 3% of the maximum supply, raising over $9 million.

42 billion RSR tokens are currently in circulation out of a maximum supply of 100 billion RSR tokens. There are around 50 billion in the Slow Wallet, which is intended to support the expansion and adoption of the protocol over years. Any withdrawal from the Slow Wallet will be accompanied by an announcement of the purpose of the withdrawal. It comes with a hard-coded 4-week withdrawal period, which means that any individual holder can “beat the team” in selling should they disagree with the purpose of the withdrawal.

The RSR token can be traded on the Binance exchange, Kucoin, Huobi, and many other centralized exchanges.

App users can procure RSV directly from the application via an on-ramp system. The on-ramp RSV procurement facility is maintained by Independent Liquidity Providers (ILPs). ILPs manage RSV procurement requests by receiving the exchange amount from the app users and sending them an equivalent in RSV stablecoins.

ILPs charge fees and commissions for the service. The procurement process is overseen by the RSR team who monitors the process and screens for irregularities. In case of disputes between the users and the Independent Liquidity Providers, the RSR team sets up an arbitration panel to rectify the dispute.

The Reserve app is built to serve the under-banked, users in areas with volatile fiat currencies, and cryptocurrency enthusiasts who simply wish to explore the power of stablecoins in a proper financial sphere.

Cryptocurrency needs efficient stablecoins beyond the current offerings, and Reserve offers unique coverage in the field. We’re not sure of the exact adoption rate of Reserve, as the team mentions that their numbers are off-chain until they can find a suitable L2 that can maintain their users’ privacy, as real world adoption means someone could trace a user’s net wealth from their transaction in store!

However, its system has shown noteworthy capabilities, and when applied to a broader economic sphere, Reserve is expected to deliver plausible results in comparison with other varieties of stablecoins.

Reserve’s approach to a stable value asset is a good study point, even though it is still in an early stage of development. From a macro viewpoint, this approach can be adopted by mainstream financial institutions as well for cryptocurrencies that wish to tame volatility.

Reserve simplifies this adoption through the RToken technology. Using the RToken infrastructure, any firm can create backed assets and draft mechanics to stabilize its value without going through rigorous procedures. As cryptocurrency communities and the world outside it embrace decentralized alternatives, stablecoins like RTokens could gain more adoption.

Reserve’s permissionless protocol lets anyone design, deploy and govern stablecoins backed by a diverse set of assets, with shared DeFi yield and backstop-insurance. They believe that the future could host a variety of different asset-backed stablecoins with unique features for large and small economy use cases. Eventually, there could arise a global reserve currency that is outside the fumbling of geo-political and big tech agendas, retains its value indefinitely, and isn’t too volatile.

*Note: Coverage of this project is for informational and educational purposes and should not be taken as investment advice.